Hey StarBreakers,
I’ve been asked to do a blog about how I create the music for StarBreak®. I’ve really been enjoying the process of working on the game and today I’m going to share my process of creating the music.

The first thing I do when I get a new level to write for is play it and get a feel for it. I’ll usually make a video and take screenshots so I can constantly refer back to certain parts or jump ahead and see if the ideas I am thinking of will work throughout the level. At this point I usually just mess around with my keyboard, paper and pen, or whatever I have nearby to try and get a starting idea.

Each level contains two pieces – a level loop of around two minutes long, and then a one minute loop for the boss. There are a couple of things that go into consideration whilst in the early stages of a track: First, the music has to be distinctive and have something unique to that zone. Secondly, since the tracks are going to loop, they have to be work with repeated plays. I try and work in a few subtle bits and pieces that listeners will only pick up after repeated listens to keep it as fresh as I can. The hard part is always the idea – getting those first few notes, the right texture, the right tempo (speed), etc. There are often so many ways to go, sometimes you just have to pick an idea and see where it takes you.

Once I’ve come up with a basic idea I’ll begin notating. I work in Cakewalk’s Sonar, which is a DAW (Digital Audio Workstation). Basically it’s a program that allows you to write, edit and record music and sounds. Other examples include Reaper (as Dustin showed us last week), Cubase, Digital Performer, Logic, Pro tools and Ableton. Of course the great thing about these programs is you don’t have to notate traditionally - you can also play in the music with a keyboard, draw notes on a grid, etc. Here is a screenshot of the notation view in Sonar showing a snippet of strings from the Fire Forest level: 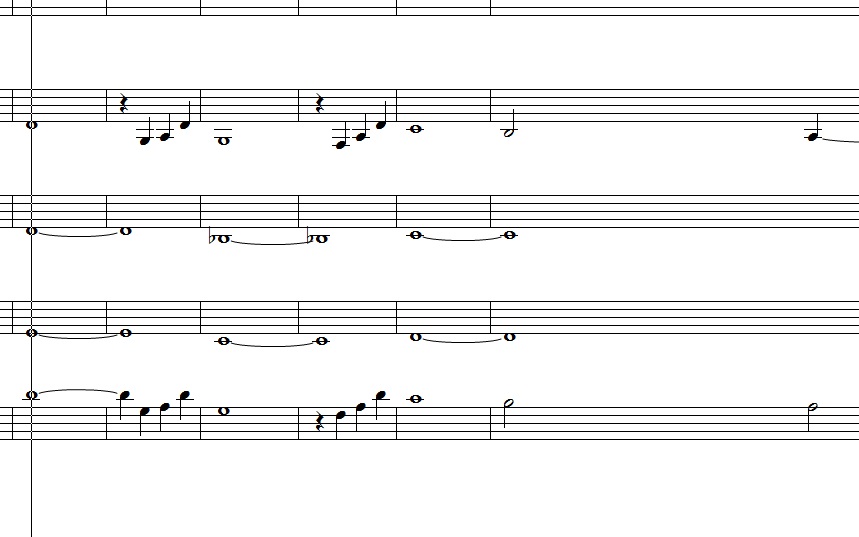 The benefit of using a DAW to work in instead of something like Sibelius or a more traditional notation program is that you have much more control over the overall sound – especially when working with sample libraries, which we’ll get to next.

Here is a screenshot of the East West sample library, one of the sample libraries I use for the game. Basically it is a collection of high quality orchestral instruments that can be applied to each ‘track’ (or ‘line’ of music). I use this as a plugin within my DAW, to give sounds to all the notes I write: 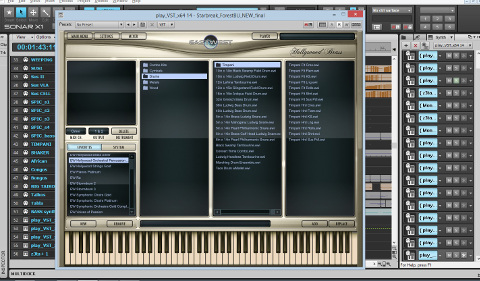 Sample libraries are built from instruments recorded at all kinds of different dynamics across all the notes. They are then programmed together into a patch. So for example, let’s say I have a simple flute melody.

I’ll load up a flute patch from the library, apply it to the flute track (or ‘line’ of music), and then the sample library will play back each one of the respective notes. So what you’re getting is a real player, playing back those notes at the dynamics that you set it to. Because the melody is built from samples of individual notes, the tricky part is controlling the sound to make it believable, as if that real player was playing the whole phrase.

Over the last few years there have been some amazing advancements both in the recording and programming of these sounds. It seems like a very tedious process to record them but it is definitely worth it! Some great sample library developers include East West, 8dio, cinesamples, embertone, Spitfire, and there are many, many more.

Once you have the notes in, you then have to bring them to life with dynamics and expression. In a musical score you would use dynamic markings, but since we are not dealing with real performers here, we have to draw in the expression and dynamics - like so: 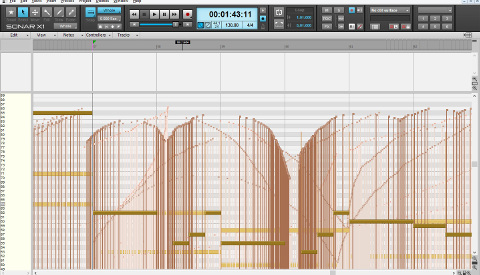 Here I am drawing in layers to control the dynamics and vibrato. It is important to spend time on this part because careful control and care to the dynamics can make a big difference to the music. On the topic of using sampled instruments - There’s a 1UP interview with Hitoshi Sakimoto, one of my favourite composers, where he talks about the approach to using samples – He says often he won’t try and emulate an orchestra (let’s be honest – nothing beats the real thing), but instead he will try and bring out the unique flavour of the sounds at his disposal. My approach is sort of half way in between these two ideas, sometimes you want to do your best to simulate an orchestral sound but other times it can be interesting to explore the sonic qualities of the sample library. Here’s a screenshot of the Fire Forest project file: 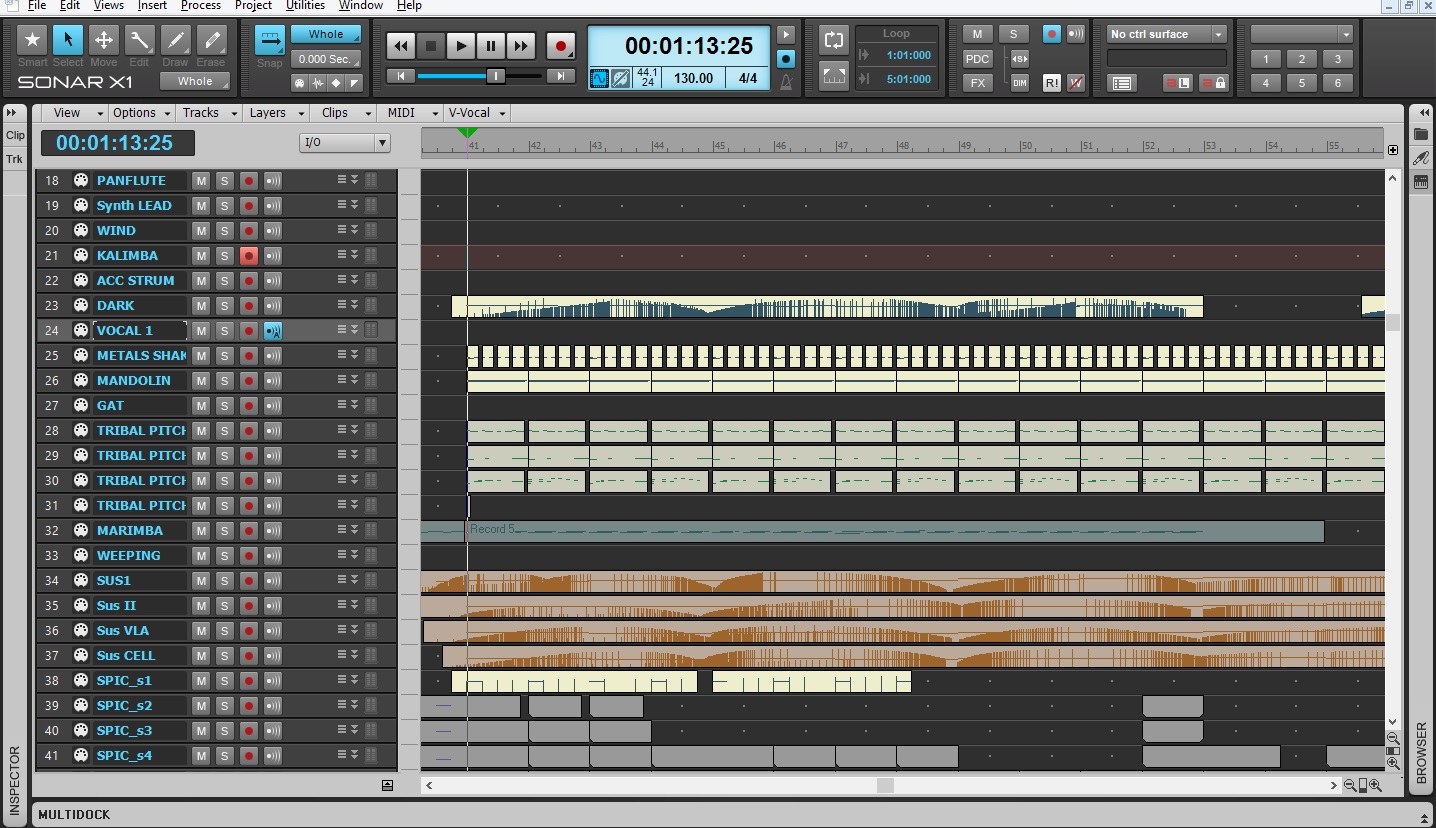 The list thing on the left is all the different instruments or ‘tracks’, and on the right is a graphical display of the music. I can click on a certain ‘box’ or part of it and edit that section - either the notation or I can edit the dynamics as shown above. Basically this just shows the overview of everything. A typical Starbreak piece will have anywhere between 50 and 100 tracks or more, just depending on what sounds I need, and the type of arrangement. At that point, it's time to do some EQ mixing (Making sure everything blends together, adding any effects and adjustments to the volume or whatever else needs to be done), for example as shown: 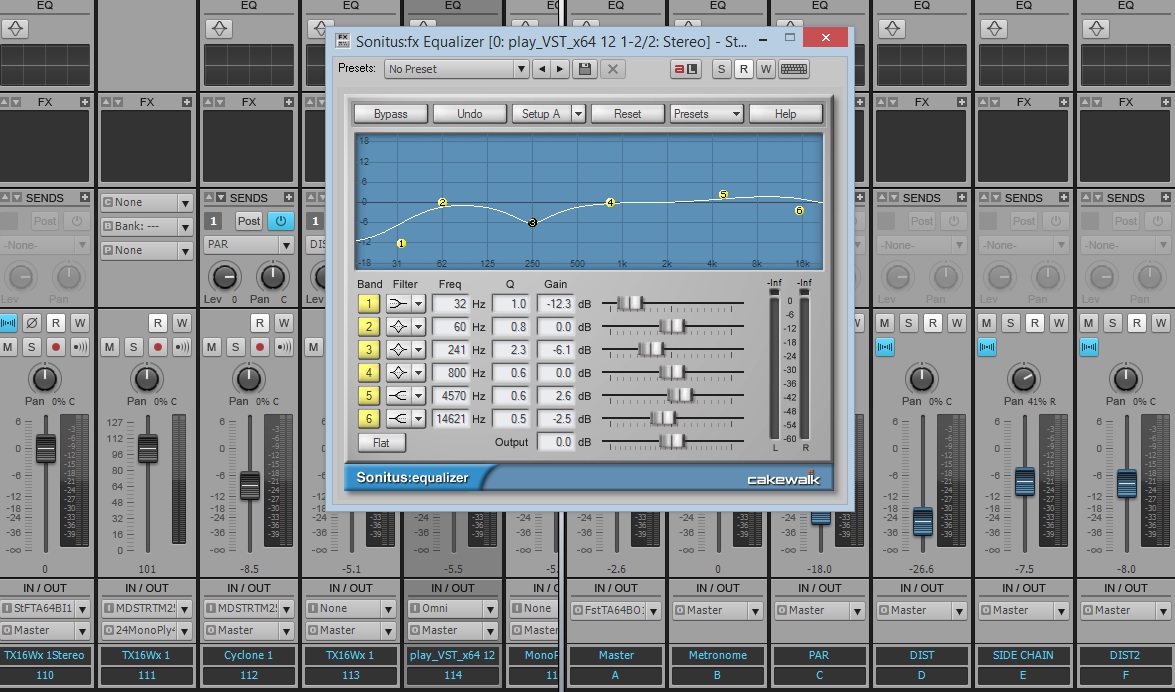 Once the piece is written and things are taking shape, I will do some editing, and adjustments, as well as some mixing before sending off the drafts to the Crunchy team for review. An important part of the process when composing for games is testing it in the game and ensuring that it works with the level, has the right energy and mood etc. Getting feedback on the drafts helps me know which direction I need to be pushing the track in – maybe it needs more energy, or a different feel, maybe an idea isn’t quite working for the level, etc. It’s very easy to get carried away with a musical idea, but it’s important to remember that the music must serve the game first. Anyway that’s the basic process. I hope this has been interesting - If you have any questions or comments I’m @chris_hurn on twitter!

Editor update: You can now listen to and download the entire StarBreak soundtrack on bandcamp.